The Brian Boru harp. Picture from The Irish Book of Days (1994)

I took my children on a short holiday to Dublin in August 2008. We spent four fantastic days there, visiting the Zoological Gardens, Phoenix Park, St Stephen’s Green, various museums and historical sites, and eating in what became our favourite restaurant, the Bad Ass Café in Temple Bar.

Of course I just had to take the boys to Trinity College to see the Book of Kells and the Brian Boru harp. After spending a good while looking at the former, we reached The Long Room where my older son Eoin, who was then nine years old, became transfixed by the harp. He spent a long time in front of the glass case, looking closely at it from every angle. As he gazed at it I read out to him information from the signs: that it was the national emblem of Ireland, depicted on coins and the Guinness logo and uncounted cultural items worldwide. That the harp had been restored in recent times, and that recordings had been made of it being played. Eoin was so entranced by it, it was almost impossible to eventually convince him that that it was time to go.

In the gift shop afterwards, the harp was all Eoin was interested in. We bought a harp fridge magnet (which still has pride of place on my fridge), and numerous postcards featuring the harp. When we arrived back home in England a few days later, Eoin looked relentlessly for pictures and information about the Brian Boru harp – and other harps – on the internet. He drew pictures of harps in sketchbooks, and became obsessed by playing a game on the computer – Fate – which featured the music of O’Carolan, played by a traditional harpist, on its soundtrack.

Later that year I took my sons to a concert in Lancaster, featuring harpist Wendy Stewart. Eoin went to chat to her in the interval, and declared his desire to learn the harp. Very kindly, Wendy let him have a go on hers. It was the first time Eoin ever got his hands on an actual harp, and absolutely confirmed his desire to learn to play it himself.

And so we reach back in time, to gather another thread to weave into the tale. 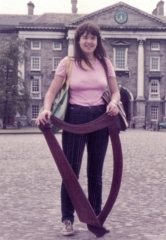 A very young Bev, in the quad at Trinity College Dublin, with Not-the-Brian-Boru-Harp

Long before my children were born, during a trip to Dublin with my friend Ross Campbell in the early 80s, I bought a harp. It cost me 50 punts in a junk shop in the Liberties. Ross and I were there on a day trip, having travelled overnight on the ferry as foot passengers from Liverpool, so had nowhere to leave the harp while we shopped. Between us we took turns carrying it around the city, where it attracted a lot of remarks from shopkeepers, fellow tourists and passers-by. We even took photos of each other with it outside Trinity College, where its earlier forebear resides.

The funny thing was that Ross and I had both wanted to see the Brian Boru harp during our visit, but had done our research imperfectly. For some reason, we thought it was at the National Museum of Ireland, which we visited, only to find no harp in sight. When we got back home and realised our mistake, our mutual friend Richard Hone teased us unmercifully about the Lost Harp of Dublin. Our inability to find the original, despite somehow managing to bring back a substitute, became an in-joke between us all for a long time.

An equally young Ross, parading the streets of Dublin with the fake Trinity harp

I got the Dublin harp restored and restrung, and played it for a little while, before losing interest to focus once more on my first love, the flute. Whilst between houses (I moved around a lot in the 80s and 90s), the harp became a rather large piece of baggage, so I ended up selling it to Ross, who felt as sentimental towards that particular instrument as I did, given how we’d discovered it together. It languished in Ross’s house for many years until 2008, when my son Eoin, having become enthralled by the Brian Boru harp, declared a desire to learn to play.

The threads converge, weaving into the present.

Most parents, should their child ask them for a harp, might struggle to meet the request. Not so I, as of course I knew where such an instrument could be found! In 2008 Ross gladly sold the Dublin harp back to me, keen to support my son’s ambitions. Having been un-played for many years, it was not in an immediately playable condition. Being a bit short of cash, it took me until summer 2011 to get it restrung. But once this had been done Eoin, whose interest in harps had only increased in the interim, at last had a harp of his own.

And so we blend another thread into the tale.

By sheer coincidence my old friend Celia Briar, a very accomplished traditional harp player who I’d played in a band with during the 1980s, was back in the UK in Summer 2011 for a protracted period (having lived in New Zealand for many years) and was able to give Eoin some lessons. He learned fast, highly motivated as he was. And Celia has been back several times since, giving Eoin lessons whenever she can. She is an immensely kind and patient teacher, and a fantastic musician who Eoin greatly respects. To our very great delight, she will soon be moving back to the UK for good.

And here is where the threads are pulled together. It turns out that Celia has a connection with the very harp that Ross and I failed to find all those years before, and that Eoin first fell in love with: the Brian Boru Harp in Trinity College Dublin.

Celia learned to play the harp from a lady called Mary Rowland. In 1961, Mary was the harpist who was invited to play Brian Boru Harp in a sound experiment, after it had been newly restored and restrung. It was the one and only time in over 200 years that it had ever been played, and it has never been played since.

About Mary Rowland and her connection with the Brian Boru harp, Celia has this to say:

Mary is the one who taught me about the celtic harp tradition in Ireland and told me lots of wonderful stories. At the time I knew her, in the late 1970s, she was in her 70s and living in east Lancashire, near Rishton. Years before she had played the famous Trinity College (Brian Boru) harp. The story she told me about that harp was as follows:

The harp had been stolen, and when it was finally found, it had been buried for some time, and was in very poor condition. It was not the sort of instrument that could easily be renovated, as the sound box was carved out of a single piece of hollowed-out willow (known then as sally).

The curators wanted a recording of it for posterity in case something else happened to it. Mary was the person they invited to do it. It sounds like a huge honour, but in fact was a nightmare for Mary!

Mary knew that these ancient wire-strung harps were meant to be played on the left shoulder, with the melody played on the left hand and the chords on the right – the opposite way round from modern harping, so she had to learn to do this. She also had to grow her nails instead of using her fingertips. This would be normal for someone who plays wire strung harp, but not for someone used to playing on gut or nylon, as Mary was.

Finally, she had to research the tunes and as far as possible the kinds of arrangements that would have been played on the harp when it was in its prime. I think the arrangement she used was similar to the style used by Denis Hempson, and noted down by Bunting at the Belfast Harp Festival in 1793. Hempson was in his 90s by then and was the only player known to be playing in the old style – the one probably used by the itinerant harpers in their heyday.

Mary took up these challenges and went ahead with the recording. That recording still exists, and by all accounts it is very strange! The harp was too weak to be brought up to tension long enough to settle down and stay in tune. It was freshly strung with brass strings for the recording, and never stayed in tune even for the length of one tune. I’m not sure if it is possible to hear the recording and imagine what the old harpers would have sounded like.

A rare audio recording of Mary Rowland playing the Brian Boru harp can be found on Simon Chadwick’s Early Gaelic Harp website. The haunting sound of it makes me shiver. The following account is given on the webpage:

In 1961, after its restoration in London, the harp was restrung by Joan Rimmer, using brass wire. It seems that Joan brought some of the strings up to tension, while harpist Mary Rowland played the harp <…> The tunes played on the audio were the Irish tune Umbo agus éiriú from Bunting and the French dance Jolivete, as well as experiments with sounding harmonics, pedal-harp style. I understand that the sound of the harp in 1961 was, despite the under-tensioned strings, a revelation to musicians who had never heard the voice of an early Gaelic harp before.

Such an extraordinary warp and weft of connection, it seems to be, all of it radiating out from an ancient harp in a glass case. It makes me wonder whether, like the name of the computer game Eoin used to play, there might be a bit of fate at work too.

Eoin in late 2012, playing a harp made by Pete Rigg of Cumbria, which has been generously loaned to him by the maker.

One thought on “The Harp that Once Through Tara’s Halls”

Error: Twitter did not respond. Please wait a few minutes and refresh this page.

Visitors to The Long Note